Deri-Maksan Group was established in 1998, in Izmir Kısıkköy Industrial Zone. From that moment to now, Deri-Maksan has achieved the World-wide standards in the quality and capacity and has continued to grow day by day. According to the researches held by Turkey Leather Sector in five regions where the leather industry is predominant, it has been found that 75% of the leather factories in those regions prefer using Deri-Maksan branded products and so, Deri-Maksan is considered as being the leader of the sector.

Although the majority of exportation is focused on Far East and Middle Asia, as it can be seen in our foreign reference list, Deri-Maksan machines were sold to more than 40 countries World widely including the United States of America. By participating to international Fairs in the important countries for Word Leather Sector, Deri-Maksan not only had an opportunity to meet up the new and existing clients but also achieved to be a well-known trade mark in the Leather Sector.

Deri-Maksan forwards to be a global company by sharing its experiences on the service of Turkish Leather Sector by preparing machinery feasibility and building residential projects to newly-established Leather Processing Companies or to existing factories that move in Organized Industrial Zone (FREE OF CHARGE) and meeting the demands of leather industrialists all around the world.

Additionally, Deri-Maksan Group not only provides the spare parts or service of the machines that are under guarantee for 2-years against manufacturing defects and at quite economical prices; but also offers you a consultancy service for the factories that you plan to establish on a turnkey basis with the use of gained experiences from the turnkey factories that Deri-Maksan had established.

The aim of Deri-Maksan is; always improving the quality, production and exportation capacity, developing the machinery and export with better and faster service by young and dynamic personnel as well as the best service concept since established. For achieving this aim, Deri-Maksan continues with taking the step from the left point by with updated web-site by 2012 and attempts to deserve customers’ confidence and interest by its safe steps to Turkish and World Leather Sector. 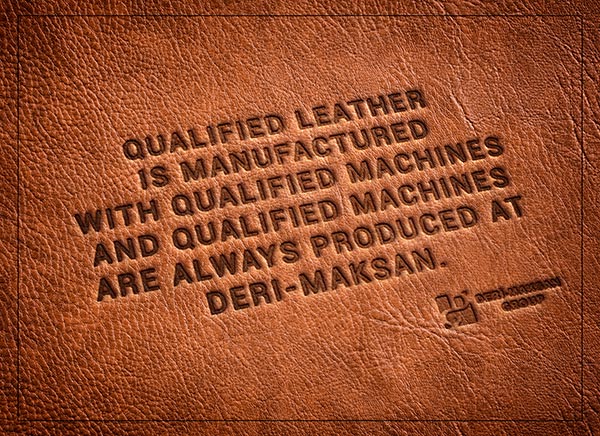